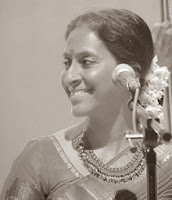 The contemplative quality, her expository technique giving space for creativity, her intuitive and melodic approach; all these lend a spiritual tone to Bombay Jayashri’s music- states a renowned critic in The Hindu.Born into a family of musicians with rich lineage and steeped in pedigree music, Bombay Jayashri Ramnath represents the fourth generation of music practitioners in her family. Jayashri has been groomed under the guidance of legend Shri Lalgudi G Jayaraman and Smt T R Balamani. Jayashri, today not only bears the torch of the Lalgudi tradition, but has also evolved a distinct style of her own.

With a career extending over two decades, Jayashri is today among the most sought after Carnatic musicians. The myriad aficionados, spanning generations, that throng her concerts would bear ample testimony to this. Her work has won her the acclaim of prestigious institutions in India and abroad.

Jayashri has deployed the essence of the classical idiom most effectively in her search for avenues beyond the concert format. More recently she has harnessed her skills towards composing music as a powerful catalyst in promoting our rich legacy in literature and other art forms which have opened up new vistas for exploring her creative instincts. Her composition for the operatic ballet based on the Tamil Epic – ‘Silapadhikaaram’ is an example of this.

In her voyage as a cultural ambassador of India’s rich heritage, Jayashri has performed extensively in India and abroad in the most prestigious fora, drawing critical acclaim wherever she performed. Jayashri has the rare privilege of being the first Carnatic classical performer in the Opera House in Durban and the Russian Opera House in Helsinki, Finland. Drawing from this exposure Jayashri has been collaborating extensively with Western classical music groups in creating what could truly be described as world music which opens up new vistas of music appreciation.

Another dimension to music which Jayashri is focused on is in exploring the therapeutic and healing value that music can generate. She has been working closely with institutions caring for autistic children to help open up their senses through the medium of music. This is a deep and long commitment which she has taken on and a very laudable one at that.

To say that her music is global would indeed be a truism. Her training in Hindustani Classical system has further helped her in this musical odyssey. Her researches into music as we can see are unending, and besides her musical performances, she continues to deliver workshops all over the world on the subject of World Music. Her contribution and involvement with schools where she has conducted workshops and interactive sessions to kindle interest amongst school children into our rich tradition of music is her way of giving back something of what she has gained. Her very limited foray into film music has drawn a new class of listeners into the world of classical music.

Jayashri represents the model emerging new generation musician India is proud of. A seamless blend of uncompromising adherence to the core tradition of classical carnatic music as well as a ceaseless quest for quality music in any form would best personify Jayashri. Courtsey:http://bombayjayashri.com