Loading...
Home » Ashok Bhaumik » Fine Arts » News » Painting » Sanjay Joshi » It is the responsibility of the artist to bring art to the people - Ashok Bhaumik 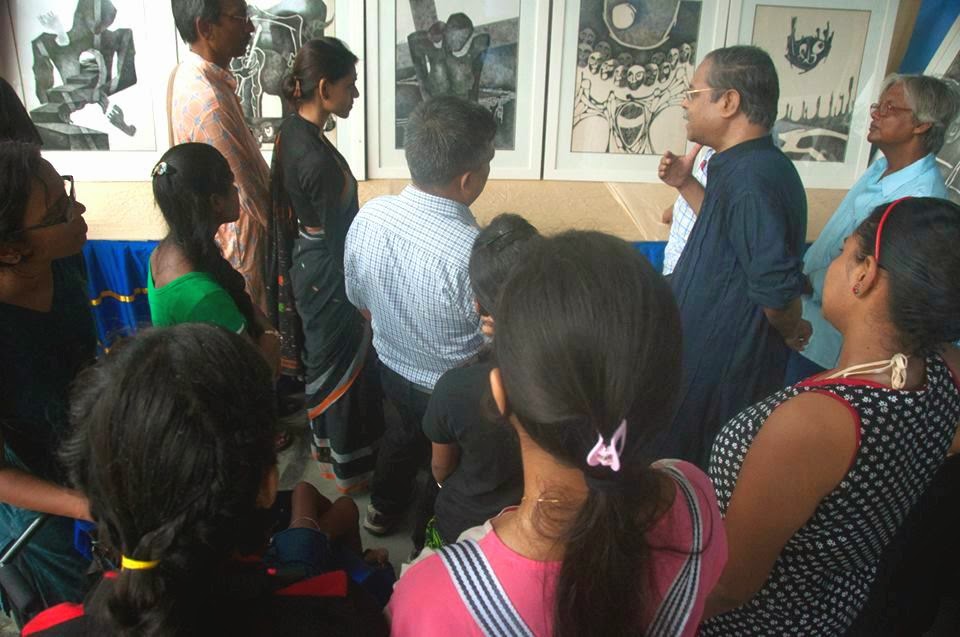 Kolkata's Jadavpur University campus amid torrential rain today in the corridor outside the famous painter Ashok Bhowmick Vivekananda Hall exhibition of 12 paintings and in the afternoon 'progressive Prwartion Indian painting' was his lecture. Had the opportunity to remember in times of emergency today. Azamgarh Ashok Bhowmik during the emergency were in town. At the same time the famous Hindi poet Gajanan Madhav Muktibodh the poem 'Dark' was understandable. Muktibodh the 'Dark' and other poems created under the influence of these paintings were Picasso paintings Guarnika Aue looks like effect. All twelve images included in the exhibition are created in the 1980s.
The exhibition resistance Kolkata Chapter of cinema and mass culture stage of the campaign group, 'Public Art Group will jointly.jointly present on this occasion the audience familiar with the details of each picture taken on contexts. To understand your point on the entire lecture slides of samples by multiple subtitles and tried to convince the world of painting. This is a special order today, he said that "today is the duty of painters painting Move to the masses."
Pursuit of progressive elements in painting before reaching India, he spoke in detail in several sections. He first section titled "look for the root of modern Indian painting." In this section, he concluded that the introduction of so-called modern painting and Orintl Society of Indian Art ', with formation - would see together. Aveendranath various painters of the period, namely Thakur, Asit Haldar, Nand Lal Bose, Raja Ravi Varma, Hemendra Majumdar paintings by various female body, he proved that our initial painting, the king and queen were limited to the search for truth. In this context, Nand Lal Bose Pictures 'sati' in the context of Sister Nivedita saying "Sati is the ideal Indian woman" is the exact comment on the early development of Indian painting.A portrait of a little digression to the audience, the metaphysics of the reasons he become classics of world treasures of painting a portrait of Goya 'Facing the firing squad: The Third of May 1808', Picasso's 1951 painting 'Messekr Korea's discussed.
In furtherance of this order, the "Art in the opposite" American painter John Singer Sargent in section framed picture of Britain 'Gassd "referring to how the misuse of gas at the time of the war by the Germans today illustration we have a large antiwar picture remains. George Clausn picture in the same doings 'youth mourning' and Picasso Guarnika discussed. Ashok Bhaumik come 1936 - you'll break your forms by creating Guarnika Dvra Picasso to create a new form is very important.
These references after they spoke at length on the new incarnation of Indian painting. He said the new face of Indian painting this section. Delhi is the Asoke since independence change as new art market is an important event. According to their estimates, due to the embassies of different countries, possibly due to the purchase of Indian painting was possible because of new markets thrive. The round also changed the old P e g. According to him, on the one hand the so-called People's Art Group indiscriminate prototype of Picasso, developed the art of the second mechanism.Souza said, referring to the pictures form Bnjit like Picasso Souza's no reason to not have any relevance that was why their pictures.He GR Santosh new incarnation of Indian painting, Sohan Qadri Raza and many of the pictures as certified by a constant force mechanism rote how they were created and new themes and people were far away.
Before the last part of his lecture 'subway art' section are shed through the painting of sharp comments on incoherent institutions. Particularly through the work of Subodh Gupta tried to explain how they are governed by the rules of the art market. Instead of art convey a sense of lightness and spaciousness stuck in the game. Absolute Vodka Bottle appearance, therefore, are creating Subodh Gupta, 1 gold, forming forts are made ​​and the status of art are out and Thukral and Tagra Gold Flake. He ruefully admits that, in the painting nowhere as large as the abode of fools. In furtherance of this, he said that unfortunately you can buy painting poetry and prose, although you still can not buy.
Ashok Bhowmick last section of his lecture "The Art of famine 'focused. Indian painting through this section of the audience they can lead to true progressive elements. In this section of the famine range Jhanul Abedin, Sudhir Khastigr cut the wood, Ramkinkar, with pictures of famine Gobrdhn ash and Atul Bose - Kmrul with Hasan, Gopen opinions, Somnath competition, Debabrata Mukhopadhyay introduced to the works. In fact for them chittaprasad Indian painters beginning with the Bengal famine, Tebhaga peasant movement, Birsa Munda, Kolhapur (Maharashtra) with famine - to create images of people were fighting in Kashmir. Rabindranath in 1931 to replace the common man in the process of painting Hebbar, B. Prabha, NS Bendre goes to the running Sadekan and Kmrul Hassan.
One hour of lecture audiences Asoke order Dvra Asked Questions - Answers to 45 minutes and left many viewers due to the spontaneous question that the true heirs of the progressive art is able to identify the continuation of Hassan Ashok Bhowmick Kmrul in today's era subway art they are able to search.People the opportunity to be the darling of the audience and the artist arts subway Asoke detail too many queries answered. Kolkata Chapter Coordinator to conduct lectures of cinema of resistance by oysters. ,
Presentation: Sanjay Joshi